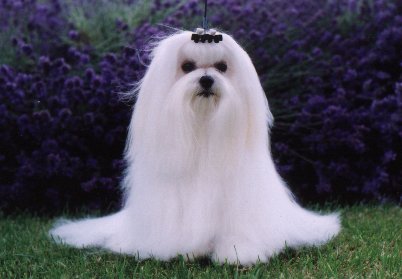 Austin has made his new home in Canada with owner Jennifer Shaw and co-owner Ron Stonke. His breeder and co-owner is Tonia Holibaugh. Austin is pictured winning his first Canadian Toy Group at just 12 months of age with his owner/handler Jennifer Shaw. He completed his American title with 4 majors, including Best of Winners at the California Maltese Specialty at just 10 months of age and finishing the day after the Evergreen Maltese Specialty with a Best of Winners win for a 5 point major! He won Grand Sweepstakes at the California Maltese Specialty as well as Best Puppy in Sweepstakes at the 2000 AMA National Specialty!!!! He has completed his Canadian and American Champion Titles and is a Multiple Canadian BEST IN SHOW WINNER! Austin has been the #1 Maltese in Canada for the last 3 years!!! Look for Austin out as a special in both Canada and the US!!!! 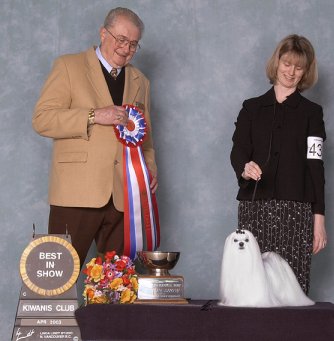 Austin is shown above winning his most recent All-Breed BIS under judge Stephen Hubbell!!!!

Click here for more pictures of Austin during his Show Career!